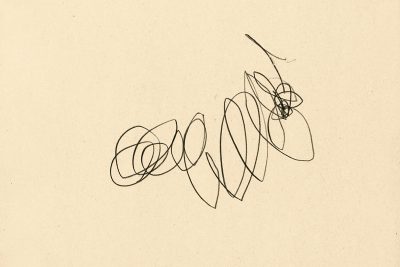 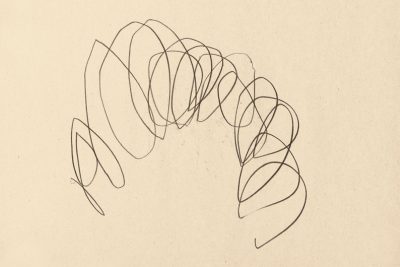 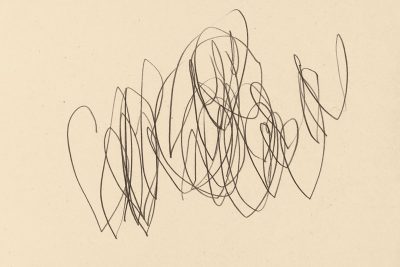 we have discarded imitation, the lifelike depicting of nature. via abstract forming we found our way to applying the concrete and the reality of the physical substance of the paint. the sensual arousal of the painter is needed. awakening the dionysian, awakening the unconscious detects, as a seismograph does quakes, the organic excess of creation. the bite of the predator is demanded from the painter. the intensive experience of the dionysian is destruction and creation simultaneously. like the big bang, the mythical lacerating situation of the god dionysius, like the fundamental excess shown in the mythical leitmotif of the o.m. theatre.

the pencil of the child seeks to scribble, things sanctified by civilisation are scribbled on in some way, defiled. something one can write and draw with is used in its most fundamental form. something rubs off, dirties, smudges, a cosmic innocence attempts (unthinkingly) to tentatively leave traces. this can also be done aggressively. the scribbled on is impure, tainted. repressed restrained instinctual needs make themselves visible. acts like the forbidden smearing of excrement, the eruption into scribbling soiling (yet to be even recognized as such), emerge. the primeval form of the creative, not only artistically, happens. the cosmic creative act, realizing what is alive and vital, is performed. the impulse takes place that brings forth suns and gives birth to galaxies, that makes cosmoses balance out and, in the sense of the eternal recurrence, disappear again.

my scribbling tries to penetrate deep into being, into the groundless (without beginning and end), into the fundamental excess. a total, extensive automatism is applied. the situation of the drives of the unconscious expresses its quakes and shudders through gestures.

i thank arnulf rainer for the spark of inspiration, his TRR manifesto published in the 1950s left an indelible impression. his radical turn away from all traditional painting led him to buddhist fields of thinking. his central forms and blind painting stimulated me to undertake my first scribble drawings in the 1960s.

the essentially creative act is grounded in the timeless, in the beginning and endless, in the infinite abyss, in infinity, where all is spaceless, the void. When one severs him/herself from past and future and lives in the moment. experiencing the moment of the creative event, one acts out of the timeless ground (causelessness), of isness. Becomes the fact that IS deepens into this scribbling beginninglessness and endlessness. the graphic  √root extracting of the scribblings want to excessively haul the creative act out of the isness and into the intensification of isness. (2018)