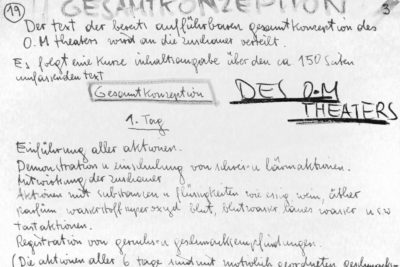 the theory to my work is an essential element for understanding it more deeply on the one hand, but it is not an explanation of my art on the other. only after my art has been grasped through the form of its (verbally unexplainable) essence, can my theory, as a means of analytical reflection, enrich the understanding of my art. my art does illustrate philosophical facts, it discovers them. my art runs in the pathways of philosophy, is embedded in them. the usefulness of my art confirms this philosophy. my art gives birth to the philosophy of being. my work, my o.m. theatre is an instrument, it corresponds to a machine. a dramaturgy must be used which often is akin to a psychoanalytical process. sensory experiential processes have to be initiated. therapeutic processes must be set in motion. cathartic abreaction process are induced. the synesthetic method is presented and explained. so too the system of the score. the taking up of collective psychological mythical facts needs to ordered and explained. wagner dealt differently with mythical phenomena than freud, jung and their successors. the completely different approach to myths through the o.m. theatre can reveal the mystical leitmotif of the o.m. theatre.
once again: all my theoretical writings illuminate how to approach and interact with my work for those who have already understood it. they deepen once more the whole intention in its essence. perhaps my writings outline what my work wants more completely than this is actually capable of achieving. perhaps the theory overstates the practical effect or – ideally, the realisation of the o.m. theatre is driven forward by the theory. (2019)

as i began to note down my first serious scores in 1958, i considered myself crazy or at least unrealistic. although i firmly believed that this theatre had a future in the long term, i never thought concretely about a possibility to perform it. i often feared that i would never experience a performance of this theatre. when i then succeeded, bit by bit, more or less randomly, at first hesitatingly, to realise my ideas after all, then i was always astonished how deeply my scores spoke the truth. i was happy to see them realised, both for the optical and the acoustic realm. as i saw the first successful realisations, i was able to recognise: everything fitted together and added up. indeed, it was often more beautiful ‘in reality’ than i had conceived in my mind. in london, 1966, as i heard my noise music for the first time, i was overjoyed. in 1977, as i heard my musical ideas played by a really good orchestra for the first time in bologna, it was the requiem for my wife beate. a mournful earnestness transported my music close to a cosmic jubilation. as always, beate had helped me (this time from somewhere else). in this sense, the score is superior to every documentation. whoever has enough imagination and empathy must be able to envision an action by reading the score. (1979)