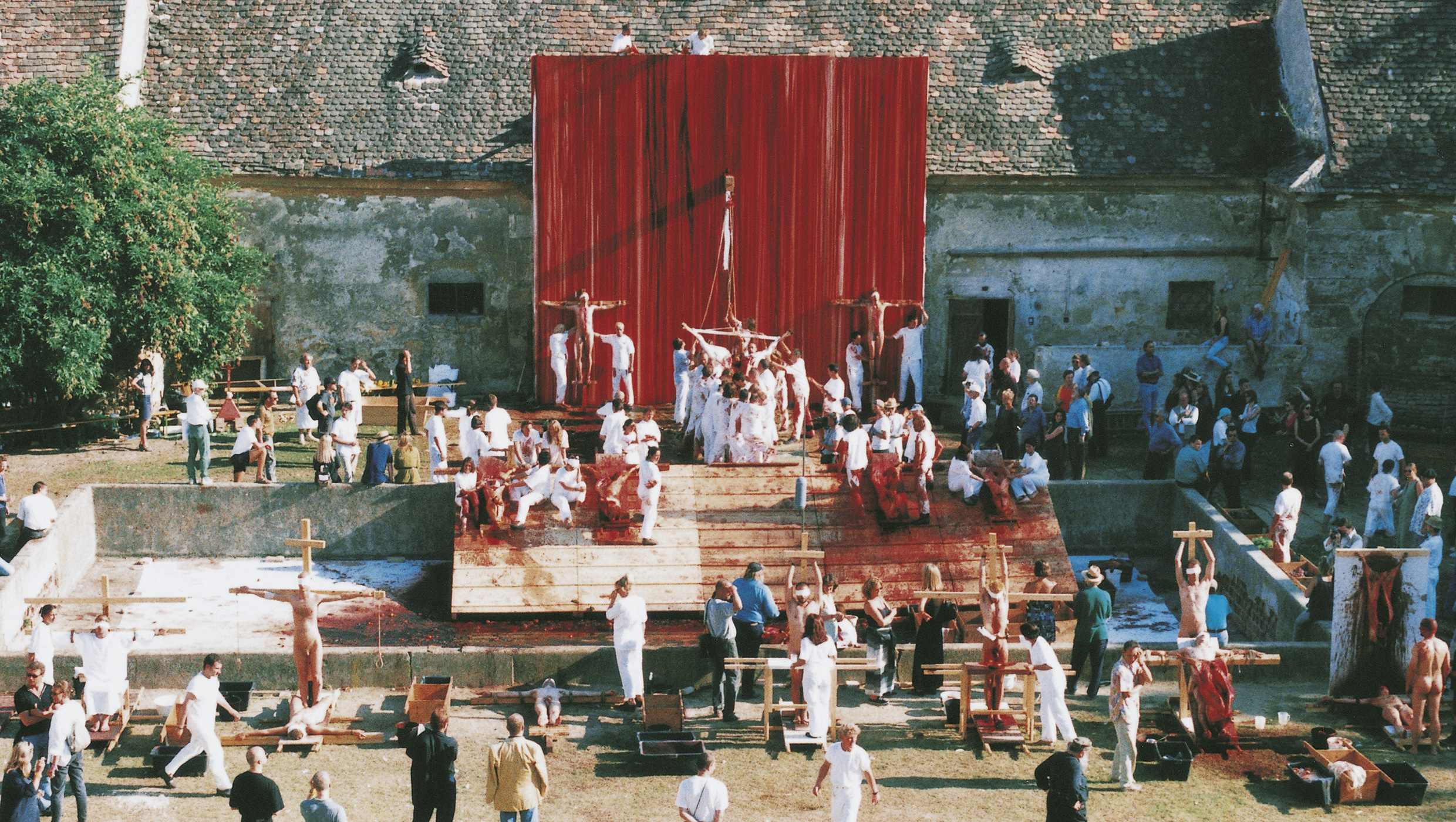 the 6 day performance of the o.m. theatre aims to be the greatest and most important celebration of man (it is an aesthetic ritual glorifying existence). it is at once a folk festival and a mysterium of existence that is brought to consciousness. the festival that is the o.m. theatre has no other pretext than the mystical glorifying of our being-here. the festival propels in the direction of an existence realized by people who come around to themselves.
the drama that becomes a feast by no means abstains from the originary dramatic of the ancient tragedy, on the contrary, the drama is led to its very essence. the feast fosters a consciousness that leads to the depths, to embracing our tragic reality. the world as a whole is to be accepted with all its extremes, its possibilities of happiness, of atrocities and the cruelty of death. failing, suffering, the tragic, the sacrifice, sado-masochistic cruelty can be viewed as a suddenly irruptive absurd hindering of the creative, in its essence the creative is bound to overcoming, repelling and removing hurdles. vivacious unfolding, ever-expanding effort in life, encounters natural hurdles and brings suffering and pain, spurs on to the pain-intermingled happiness of overcoming. the myth of death and resurrection presents itself as an allegory of the creative, the analytical technique of the play helps us to understand ourselves more totally, more uncompromisingly and more extensively, plumbing to the depths of the reality of our drives, usually remaining uncharted territory. repressed areas are unearthed and lived out. consciousness creeps and pushes to the grounds of energetics, the most sensitive moments of registering joyful lust are opened to consciousness. one essential impulse that determines humanity generally and drama specifically is taken into account. the need for abreaction is brought to consciousness and fulfilled. the drama brought to its essence is catharsis therapy, is comparable to psychoanalysis, only that the analytical process, in this case the dramatic process, is responsive to being exploited aesthetically. actions rising into a climax are deployed which trigger the very first elementary, intensive sensory sensations and lead later to an orgiastic, sado-masochist acting out by the participating performers and the audience. the associative impulse of classical psychoanalysis is replaced in the o.m. theatre by the sensory sensations evoked by the actions, which, once the censors are overcome, disinhibit and intoxicate, the actions with raw flesh, damp bowels still at body temperature, bloodied faeces, blood warmed from the slaughter, tepid water, etc provoke regressions towards anal sensuality. the joy at splashing around, spattering, pouring, smearing, soiling escalates into a joy in tearing raw flesh, a joy in trampling on the bowels. the dionysic dismemberment situation arises (the dismembered abreaction god dionysos enters the associative field). the dramatic rummages around in the joy in cruelty. chaos, an orgiastic intoxication, irrupts and breaks in over us. the intensity of the experience gives rise to a mystic of aggression and cruelty. the dramatic effect is grasped as the aesthetic intoxication of the audience and participants. hölderlin’s understanding of the tragic is important here, when he sees that the power of nature and man’s most inner core “limitlessly become one” in rage and that representing the tragic leads to transmitting “how god and man pair”.
what’s been dammed up for so long is released, the repressed becomes viewable, the endpoint of abreaction, the sado-masochist excess is reached, rendered aesthetically within the play the abreaction brings the cause of individual neuroses to consciousness. the collective-neurotic conditionality of sado-masochist myths of sacrifice is explicated.
with the conscious-raising rapturous frenzy of abreaction (the endpoint of abreaction), the dramatic effect, having become life, is brought to its climax, similar to the catastrophe of the classical drama is reached, only that in the case of the o.m. theatre the catastrophe is liberated from the tragic hopelessness of the ancient drama by the neutralized aesthetic bringing-to-awareness and rendering-viewable of the repressed, through the far-reaching catharsis. the whole course of life is condensed into a mythical experience. the rapturous intensity of existence must spread over all areas of being, across everyday life. a world overcome with cheerful joviality should allow us to serenly immerse in all possibilities of enjoyment. all the senses have to be intensified and sensitized. the extreme sublimation of the excessive is the upsurge of the intensely felt liveliness spreading through us, rising to the joyous rapture of the state of altruistic love. love not understood as commandment but as state, as the hightest state of existence, as a state of being. love is the mystic of being spread across the whole of life.