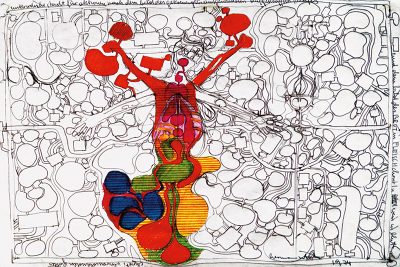 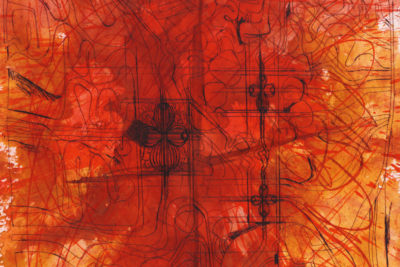 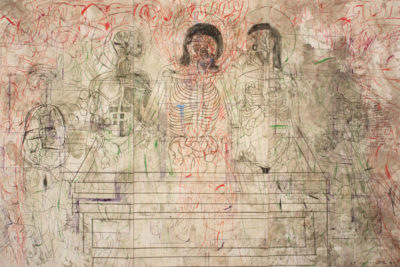 in 1965 i begann to plan the rooms in which my 6 day play should take place. i intend to build an underground theatre in prinzendorf on the zaya, for all the happenings which won’t be executed either in the open air or in the rooms fo the manor. the uterus-like darkness of the subterranean passage-ways and rooms and, above all, the sheltered vegetative life in the lightless womb, exercise a very strong attraction on myself. in the underworld, in the grave, in the earth, the nascent sleep of death takes place. the analytical decent into the unconscious vegetative zone, which my happenings aspire to, have their actual equivalents in spatial and architectural reality. it will descend to caverns, catacombs and tombs. while drawing the theater complex, i soon realized that a complimentary relationship resulted between happening and architecture. each respective form of happening required a space with a distinct character and, inversely, different rooms and passages demanded certain happenings. both media, architecture and happening, influenced one another, challenged one another.
the architectural part of my theatre project has still not been concluded. i work on it continuously, a profusion of designs ensue, from which i shall select the best for implementation. i also continually draw in order to procide inspriation for new happenings. as there are, inevitably, limits to what can be effected through happenings, there are concepts and scores for happenings which will, in all probability, never be performed. happenings are moving in the direction of conceptual art. the question of whether they are performed is, at present, not essential, the construction can pullulate and break through all barriers. it is possible to plan drama-happenings which take place in undergrund towns conceived for this purpose, the performance of which takes several weeks. most of my drawings illustrate the ground-plan of subterranean rooms and passages. after these rooms and passages have been burrowed out of the earth or rock they will either be left in a raw state, or be lined with cement. (1976)

it can’t be denied, that often the drawings for my architectural projects are for removed from what is practically realizable, mainly because these architectural fantasies are hardly possible to finance. the drawing, the aesthetics of the drawing, becomes an end in itself. i think of the unexecuted schemes drawn by michelangelo, leonardo, palladio and the baroque architects and up to otto wagner. the space seeking pencil discovers a sensuousness detached form the project and ist implementation. the specific aesthetics of the drawing venture begins to intoxicate and seduce the designer. the subetranean passages into the flesh of the earth. presented here, also require that the earth itself transmits. informal compositions of stains, blemishes and soilings will be printed over the rigid underground images. it pleases me that, whichin the context of the project, the draing has become an end in itself. none the less these plans point to something which is absolutely possible. the numerous floors printed in various colours on top of one antoher are possible and realizable, even if the density and extent of what is planned reduces us to helplessness.
my happenings demand extreme sensuality. the turning inside out of the psychic and corporeal reality is the theme of the o.m. theatre. the examiniation of moist, bloody internal organs continually takes place. the mesentery and intestines are exposed, the vegetative being man, the phenomenon of our species, demonstrates itself constantly. in consequence of this, organic forms flow repeatedly into my architectural drawings. the whole, all stages of the development of the natural phenomenon man, shall flow symbolically into thes pullulating architecture. for this reason the outline of intestines, kidney and liver shapes, human and vegetable organ forms are repeated. the manneristic expansion of my theatre project makes it conceivable that my happenings could take place within an architecture of, not only single organs, but of the whole human body transformed into rooms. the application of what are primarily drawn abstract organ shapes, led to my actually making architectural designs which imitate whole bodies or take them as their point of reference. (1987)