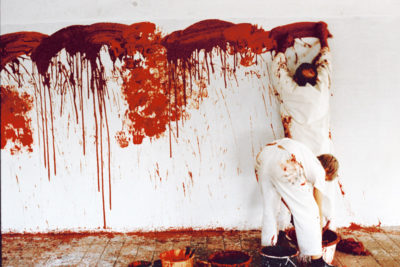 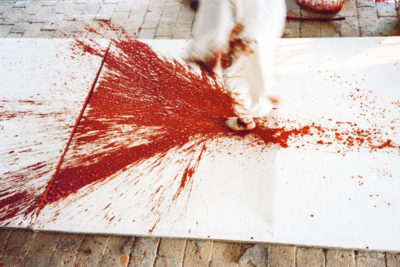 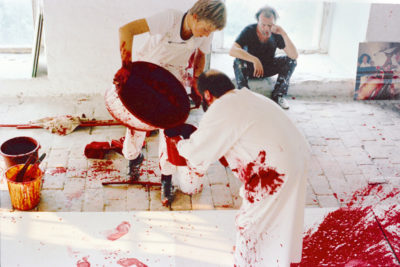 after the second world war a painting arose that did not want to represent anything, did not want to reproduce anything that already existed in nature, but rather what is concretely played out on the surface itself, the visual fabric, which itself or its impact are shown. paint was not understood in terms of its colour tones but as a concrete substance, as paste or fluid that was smeared or splattered, giving rise to works determined by the gestures and motoric of arm and hand movements, it was scrawled, smeared, substances, fluids, colors were sprayed, hurled, poured etc onto the canvas. the viewability of the action performance was a key point of this art, because many painters produced their works in an actually felt state of (sensory) stimulation and self-divestment. the positive registering viewer can grasp the creation process formally. that concrete processes and their impact prompt an intensive sensory feeling by both producers and viewers, whereby a new effect is employed, realizable for the form, which is exerted by many objects and processes. this means a specific part of the spectrum of sensory experience is activated, it is extroverted. an elementary sensory feeling serves art. paradoxically, this perception of the elementary sensory is the result of a deeper, extended, sensitized and more conscious sensual comprehension. a more profound sensual understanding of our surrounds automatically brings with it a broadening of consciousness. art informel drew on the form and raised to consciousness those feelings which lurk only at the threshold of consciousness. it is first through art informel that the human becomes mature enough to consciously absorb a part of the sensory which was once registered merely subliminally, but could be evoked through channels of association, through dreams, memory, poetry and myth. the sensory intensity of imagery, provoked by the word, is an important component of the poetic (the lyrical). subliminal feelings are brought to consciousness through form, a retroactive registration made possible. this retroactive registering of what is initially subliminally registered is turned into an aesthetic event, rendered into form. an art arose which was directly interested in deeper psychic layers, for which it then acted as a mouthpiece, the psychic repressed and displaced metamorphosed into art. these undertakings, which emerged and were pursued almost simultaneously across the globe, naturally with a wide variety of accentuations, hung on the concept of tache, the stain or splash, whereas now, due to the distance to the movement tachisme, to the development of the entire spectrum of the informal practice we wrestle with the consequences of tachisme, which are today understood differently. one begins to gain an overview and sees that nothing unifies the painters of this orientation more so than the prudishly denied move into the “animal realm”. they are all linked by a lively interest in their own sensousness and libidinal impulses, in the inner reality. they all turn the unconscious outwards and bring it formally to consciousness. whereas the first tachist informal products still incorporated the breakthrough of repressed sensuality in the compositional patterns of old painting, this traditional formal constraint was gradually torn asunder later and then shoved aside, increasingly the sensory excitation became essential, which automatically registered these eruptions like a seismograph. the joy generated by involvement in the dynamic-destructive concrete event was thrust into the foreground. the pictorial was torn and destroyed. one wanted to cast off the shackles of the painting format, in isolated cases the consequences of tachisme made themselves felt. the wish to create what was coherently pictorially now sought to end in the ecstasy of the concrete, in reality. the innermost, perhaps not even recognized concern of the tachist lay in the dionysic-dynamic, lay in the abreaction apprehending the basic layers of the psyche that brings them to conscious awareness, the excitation, the upsurge of lust, the stripping away of inhibitions, ecstasy, the release of what has long welled up – they are to represent themselves. it corresponded to the character of the tachist to be a dramatic-expressive means of expression. action painting laid claim to a passage of time, it opened up a new dimension that inclined towards the theatrical event, to a dramatic happening. informal creating and rendering is turned towards theatre, where transposed it is placed, under different preconditions, in the first manifestations of the happening and finds its authentic impact foremost in actionism.
precisely as i was introducing the rendering and configuring of reality into my theatre project i came into touch with tachisme, which at that time was about to pass its heyday. i grasped this manifestation immediately in all its consequences, because it matched the results i had come to through language and responded to the dramatic dynamical message. thereupon i attempted to pursue the practice of pouring, spraying, splashing fluids more intensely and analytically. the painting of the o.m. theatre emerged out of these efforts, an action painting which, by laying claims to a passage of time, by in part generating ecstatic production processes, had a dramatic function (i poured and hurled red paint on vertical and horizontal surfaces). i understood this painting, which entices the participation of the onlooking audience, as something like a litany, the play action within my theatre expressing itself in an open show of the painting act. my action painting is the visual grammar of my action theatre on a pictorial surface.  (1964)

the action painting of the o.m. theatre is not some revival of art informel, but a perpetually existing fundamental structure of the o.m. theatre, which leads to basic excess, to dismembering the DIVINE ANIMAL, reveals itself to be timeless. the action painting of the o.m. theatre takes place spontaneously in space at each and every action. in the case of the new results, the visual grammar of the o.m. theatre is shown exemplarily on pictorial planes. i have no longer painted in the above sense for the last 20 years. i am now fully preoccupied and engaged in realizing actions, creating scores and reworking the action relics. the exhibition in eindhoven emptied the rooms in prinzendorf. a strong desire overcame me to paint all the walls and floor surfaces again. in the hot august of this year i experienced so much joy while pouring, soiling and spraying these surfaces with blood-red paint. trained through the actions i gained a carefreeness, freshness and spontaneity that was not present in the early painting. actually I POURED AND SOILED EVERYTHING FROM TOP TO BOTTOM.  (1983)

be glad, exult and rejoice because the time has come that i don my robes given to me from the very beginning. i will stain my white robe with soaking crimson-purple graped drops of blood. oily, fatty, fruit-pulp drops of blood and putrid stinking, damp blotches of sweat soak the cotton of the shirt. my wine-owner shirt is soaked with sweat and urine, the sweating of blood. (1986)

in 1959 i came into contact with art informel (pollock, franz kline, de kooning, sam francis). i understood immediately that these painters were searching for the same thing i was through my theatre. nothing else but sensory-stimulating processes were being directly intuited and shown. nothing was being represented, depicted. the painting act itself, the process of painting taking place in time, became essential. an act that takes place in time was actually a dramatic act. i discovered the connection to theatre, to my theatre. art informel allowed the sensory-sensual events in my theatre to occur on a pictorial plane. but i had already left behind the pictorial plane with my move towards action theatre. there was no longer a stage, i stood face to face with reality. it was all about staging real events, and yet the path back attracted me. i could demonstrate the simpliest action of my theatre, namely the pouring and splashing of fluids on vertical and horizontal surfaces. pouring on surfaces (above all vertical ones) became a foundational ritual of my actions. i wanted to show how pouring, spraying and smearing and splashing of red fluid can evoke intensive sensory agitation, prompt a sensory intensive feeling. the painting process, the event was more decisive than the result. through my painting i attempted to give an example of how it is possible to immerse oneself in the most sensitive of perceptual intensity. for the plays of the theatre of orgies and mysteries i planned to have the giant surfaces poured and splashed by the participants with paint in the sense of a ceremonious ritual, a liturgical performance. there was a clear connection to be drawn between those elementary sensory excitation triggered by my painting and those agitated excesses provoked by the action performance involving flesh, blood and intenstines. an intensification was given, the escalation into dismembering and shredding the lamb. painting was already the attempt to act out repressed regions, to abreact. action painting was my way of ushering in the practical realization of my o.m. theatre. i exhibited, showing my action paintings and so promoted my project. at the same time, i held painting actions amongst close friends and acquaintances (painting demonstrations). here attention was fully focused on the event, on what was happening, which we attempted to document in photographs and films. these painting actions were the preliminary stages for my actual actions. because i had already gained the breakthrough to the action theatre in my scores, it was for me only a small step to move from the still stylized painting action to working with reality. paint became blood, the pictorial surface turned into the reality of the wall, where a slaughtered sheep was hung and dismembered in an act of crucifixion. the painting performances overlap with the actions. the painting performances as well as the actual actions are numbered separately. i peform painting actions down to the present day, many of them public, i think of them as large theatrical ritual events. in 1984 a painting action took place in turin. in 1987 i was able to luckily perform a 14-day painting action in the vienna secession. for the 1988 biennale in sydney i was able to realize a painting action. in 1997 karlheinz essl invited me to realize a painting action in schömer haus. in the same year i performed my hitherto largest painting action in the museum of the twentieth century. the museum was filled with white canvases which were poured and splashed with blood and black paint. a painting action was also performed during the 6-day play of 1998 in prinzendorf. (2000)