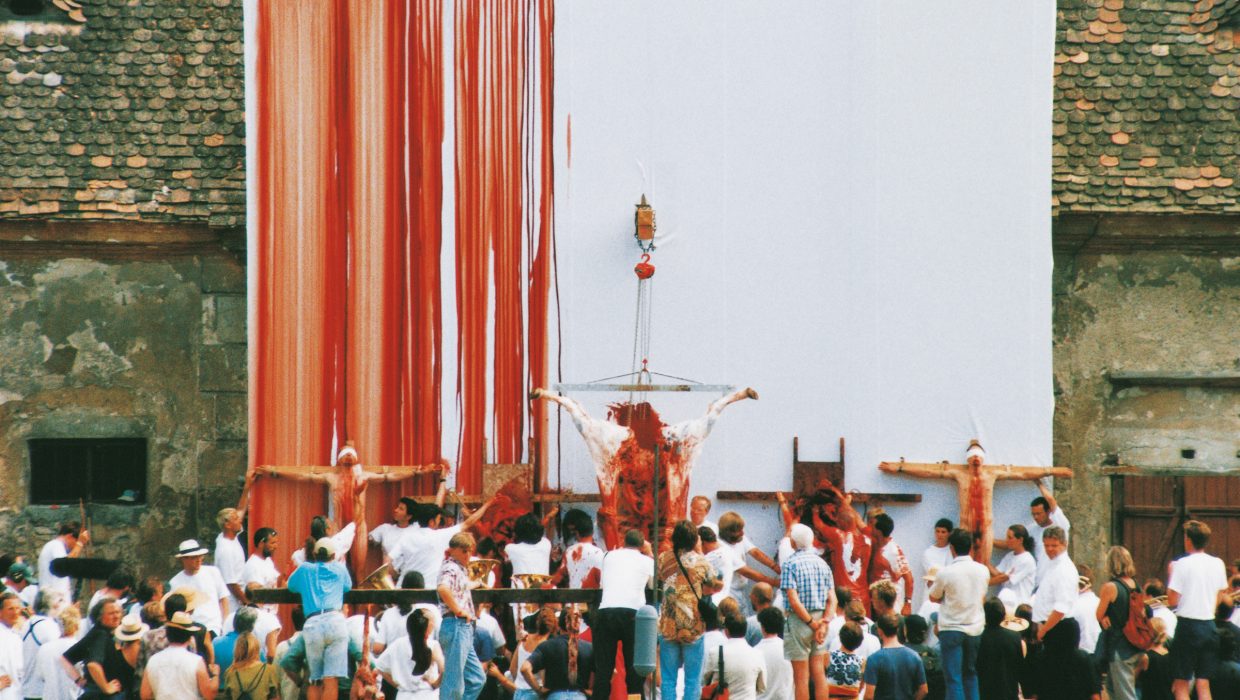 all of my artistic activities to date have been preparations for the six-day-play, which will be staged from 3 to 9 august at prinzendorf. the o.m. theatre is a genuinely new form of gesamtkunstwerk that has developed from happenings and actionism. nowhere will you find an actor playing a part. (1998)

The work’s length reflects the story of the creation, and it should be seen as an enlargement of the entire spectrum of monumental works of art. All of the actions that have been performed since then by the O.M. Theatre – i.e. since the early sixties and, from 1975 onwards, at Prinzendorf – should be understood as partial realisations of this Six-Day-Play.

The Six-Day-Play must be seen as the most complete realisation of a concept ever to have come from the broad area of happenings, actions and performance. Hermann Nitsch: “all of my artistic activities to date have been preparations for the six-day-play, which will be staged from 3 to 9 august at prinzendorf. the o.m. theatre is a genuinely new form of gesamtkunstwerk that has developed from happenings and actionism. nowhere will you find an actor playing a part.”
The crux of Nitsch’s vocabulary, which involves painting, music and theatre while simultaneously transcending their boundaries, is the staging of genuinely occurring events. Here a process of aestheticisation reaches into the heart of everyday life, into social co-existence, even to eating and drinking. The states of human life will be shown in all their polarity, from the sublimest feelings of happiness and ecstasy, the intoxicated state of being as it unfolds, to the deepest abysses, revulsion, the bestial destructive rage of the darkest inner urges. These contradictions within man are to be revealed in all their extremity. In a festival which is directed to all of our senses, the mechanisms of repression in our affluent society will be contrasted with the intensity of unfolding life.

Nature and its produce are the authentic setting for the action, and the proper means for creating it. The sky, radiantly lit by day and scattered with stars by night, form the natural canopy to the events of the Six-Day-Play. The gently rolling countryside, with its hills, vineyards and fields, replaces the traditional stage. The castle courtyard, the wine cellars, the stables, are the scenes for the events. Genuine actions, concentrated into aesthetic sequences of actions, replace the spoken word and the merely symbolic, rehearsed plot of the classical stage.

It is also planned to slaughter one bull each on the first, third and fifth days of the Six-Day-Play in order to demonstrate the unfathomable nature of the course of our lives. Nitsch: “a psychoanalytically-oriented dramaturgy allows the dionysian to burst forth from within us. suppressed areas of inner impulses – and moreover the whole of our natural being – will be made visible. the actions with flesh, blood and slaughtered animals plumb the collective areas of our unconscious minds. all 5 senses will be activated and sensitized. intoxication, eating and drinking, are integral parts of the play.”
The inclusion of such episodes in the course of the action is neither a condemnation nor a glorification of such conduct. Rather it is simply illuminates what is concealed behind the everyday appearances of human co-existence, as in involved for instance in producing human sustenance. No animals will be slaughtered simply for the sake of the Six-Day-Play. The slaughtering that is to be incorporated into the action will simply be shifted from the slaughterhouse to the castle grounds.

Man, a predatory animal, has to kill other living beings if he is to enjoy the pleasures of consuming meat. With that, man owes it to the slaughtered animal to become aware of this fact, instead of deluding himself with hygienic portioning and packaging. This aspect is not, however, the main concern of the O.M.Theatre. Nitsch regards it as just one of the many stations on the way to grasping the actual circumstances of life, a first step towards the realization that is necessary if one wishes to take action against intensive livestock farming, against slaughter under the most adverse conditions for the animal, i.e., for pure profit-making, and against the deliberate manipulation of the feed of animals whose metabolism is based on vegetarian nutriment.

The bulls to be used in the Six-Day-Play have been reared by farmers with a sense of genuine responsibility towards them. These animals are spared much that their fellow creatures suffer, such as appalling transportation conditions, or the cold-blooded refusal to administer sedatives directly before slaughter, simply to ensure the quality of the meat. These animals die in a manner that does honour to their death, which simultaneously is a prerequisite for the continuance of human life. The participants respect their death by becoming aware of the circumstances of their own lives and by cooking and eating the animal’s flesh.

“the drama is to develop into a public celebration. excessive occurrences are confronted with meditative states. the paramount aim and purpose of this festival is a profound affirmation of our existence, our life and our creation. it should bring about an intense affirmation of being that will allow the ego to become self. the mysticism of being leads to a permanent festival of life.”

The Material Employed in the Play
The score of the Six-Day-Play is 1,595 pages long and has been published in two volumes by Edition Freibord. The practical realisation of the score will begin in mid-July at Prinzendorf. 100 actors and 180 musicians will rehearse the play for a total of 21 days before staging it for the anticipated 1,000 participants (guests).

Fresh food will be served day and night. Apart from a canteen kitchen, which will prepare regional dishes for the main meals, there will also be an “amateur kitchen” where friends of the artist will prepare their own specialities as snacks. A permanent laboratory will be set up on the west side of the courtyard, where samples of smells (spices, essences) and tastes can be registered. The smell and taste motifs relate synaesthetically to the actions. In addition, 13,000 litres of wine will the provided in order to produce the intoxicated, unbridled joy demanded by the score.

Further materials for the Six-Day-Play include: 1,000 kilos of tomatoes, 1,000 kilos of grapes, 10,000 roses, 10,000 other assorted flowers, and 1,000 litres of blood. Pigs and sheep will be provided, ready-slaughtered, from an abattoir. In addition, three bulls, whose meat will be prepared for consumption, will be slaughtered during three on-site actions. This will be performed by professional butchers under veterinary control.

60 stretchers, 15 wooden carrying devices and 100 shrines will be constructed for the play. Over 10,000 metres of canvas will be employed in the painting actions on the second day. 500 ritual shirts and trousers will be made to dress the actors and musicians throughout the play. 5,000 torches will be provided for the night-time torch parades. Finally, heavy military equipment will be employed on the fifth day of the festival in the form of two tanks. 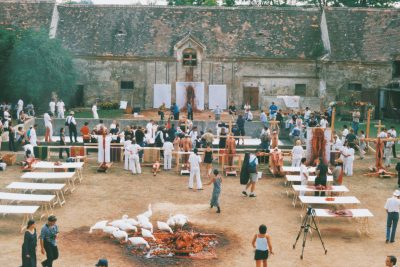 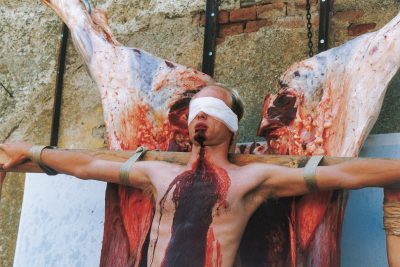 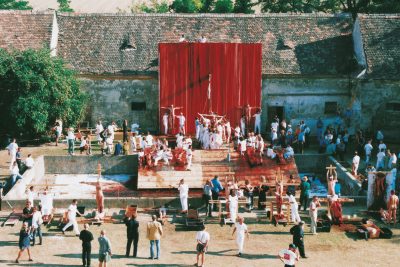 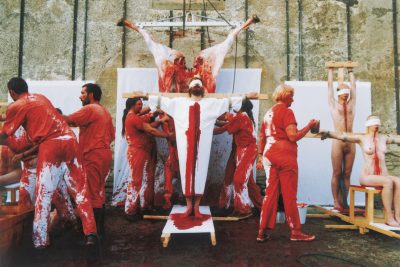 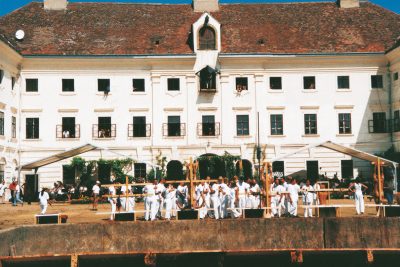 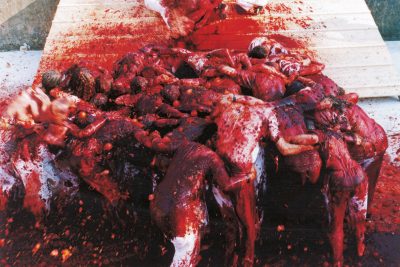 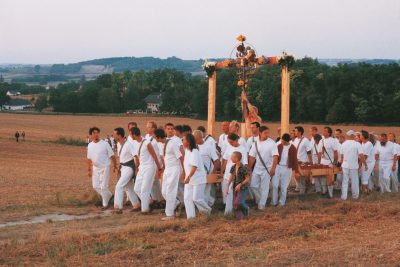 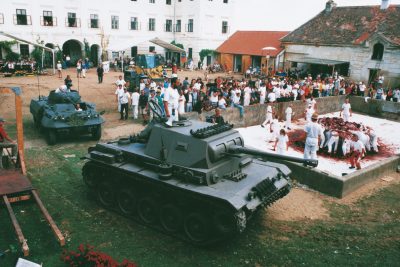 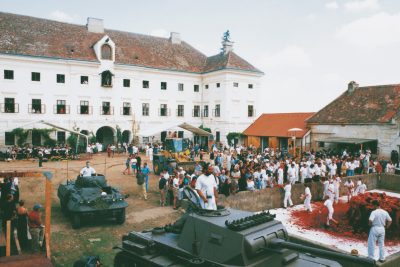 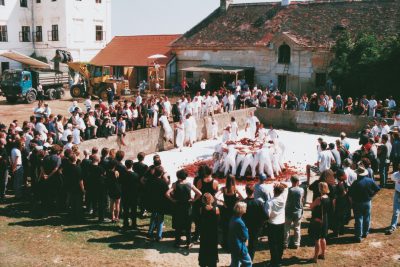 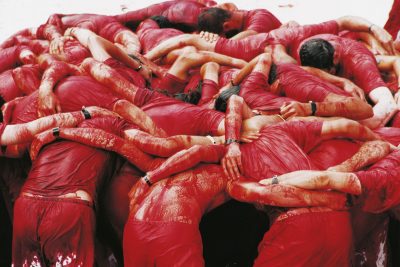 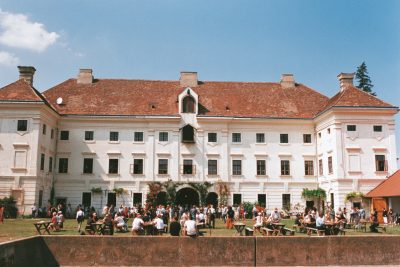 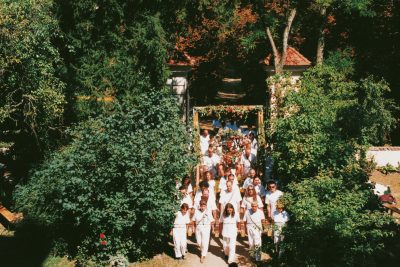 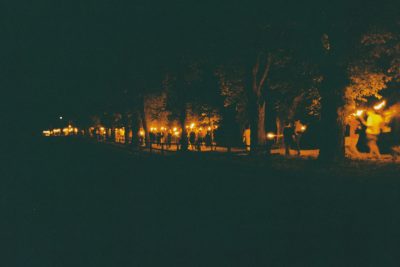 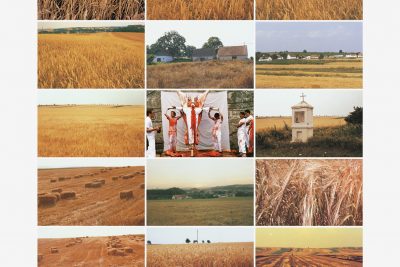